This article was written exclusively for Investing.com.

Bull markets are like a powerful drug as they hypnotize market participants with the promise of gains. We have seen herds of trend followers stampede into stocks, commodities, and all asset classes during bull markets. While bull and bear market trends can provide profits, everyone loves a winner. Market participants are far more comfortable with the long than the short side. In most markets, a zero price limits the risk on a long position. On a short position, the theoretical risk is infinity.

The ascent of the cryptocurrency asset class has been like heroin for those market participants looking to make a small investment into a large fortune. Tales of those who put $100 into at five cents and are sitting with a $114 million fortune at $57,000 per token is a potent magnetic force. A herd of investors and speculators are trying to figure out which crypto will be the next to deliver untold wealth. MilliMeter () and Flokinomics (FLOKIN) are two tokens that recently registered impressive gains and are on the speculator’s radar.

The market cap moves back over the $2 trillion level, and the number of tokens continues to grow

Since late September, the price action in the cryptocurrency arena turned bullish, pushing the asset class’s market cap higher. After sitting below the $2 trillion level, the value was sitting at the $2.289 trillion level on Oct. 12.

As the chart highlights, Bitcoin and had 64.4% of the total market cap, with the other 12,642 tokens (and growing) accounting for the remaining 35.6%. The number of tokens continues to grow each day, whether the market cap moves higher or lower. The unending demand for new cryptos is fueled by the incredible returns of the leaders, Bitcoin and Ethereum.

Bitcoin and Ethereum take off on the upside

The parabolic rallies that took Bitcoin to a record high in April and Ethereum to its peak in early May corrected with declines as fast and furious as the price appreciation. The shooting stars became falling knives.

The price dips from April and early May were scary, but the most devoted cryptocurrency proponents stood tall, calling the correction a golden buying opportunity. So far, they were correct as Bitcoin and Ethereum have doubled from the late June lows.

Meanwhile, most mortals allow emotions to guide investing and trading behavior. Ironically, fear and greed make most market participants bearish and scared when prices collapse, and bullish and greedy when they are exploding higher.

The price crash likely sent many to the sidelines. The recent rally is fueling another round of speculative frenzy with a growing number of market participants looking for the next token to deliver spectacular rewards. MilliMeter and Flokinomics are two cryptos that have been in the spotlight over the past weeks.

MilliMeter made a move to the upside

Millimeter is a platform that “protects the global value of E-data, allowing users to quickly share and protect their own value and copyright.” The website outlines the app and token economy that has a total supply of two billion tokens. 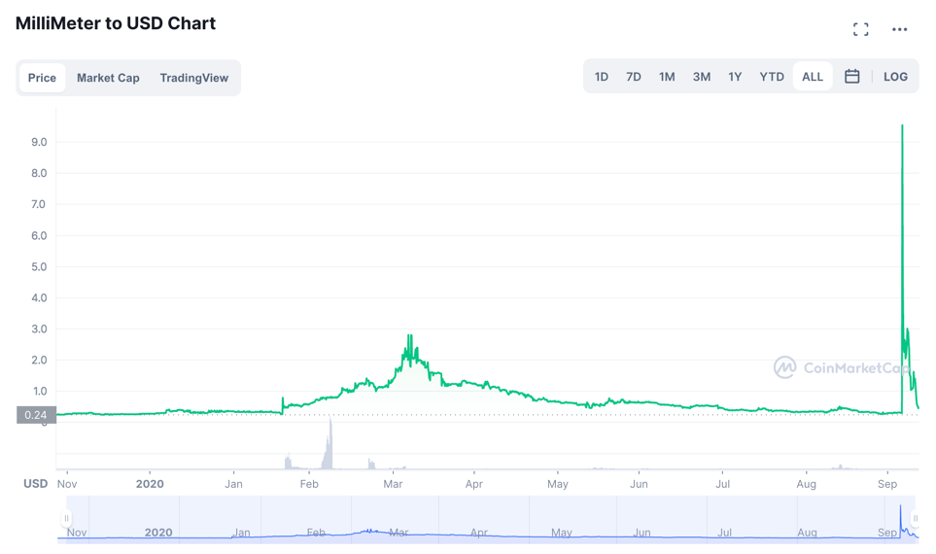 MM was at the 48 cents per token level on Oct. 12. The price doubled from 24.41 cents in November 2020. On Oct. 6, it reached a high at $9.54 per token before falling. The price action in MM is an example of what speculative frenzy can do to the value of a “hot” or “cold” token and the high degree of risk of the asset class.

Flokinomics’ website claims FLOKIN is the “BEST rebase token known to man!” FLOKIN is a meme-based cryptocurrency that operates on the Binance Smart Chain and is a knockoff, named after Elon Musk’s dog Floki. FLOKIN is not the only Doge knockoff, as other coins are looking to capitalize on Mr. Musk’s endorsements and bask in his crypto profile. 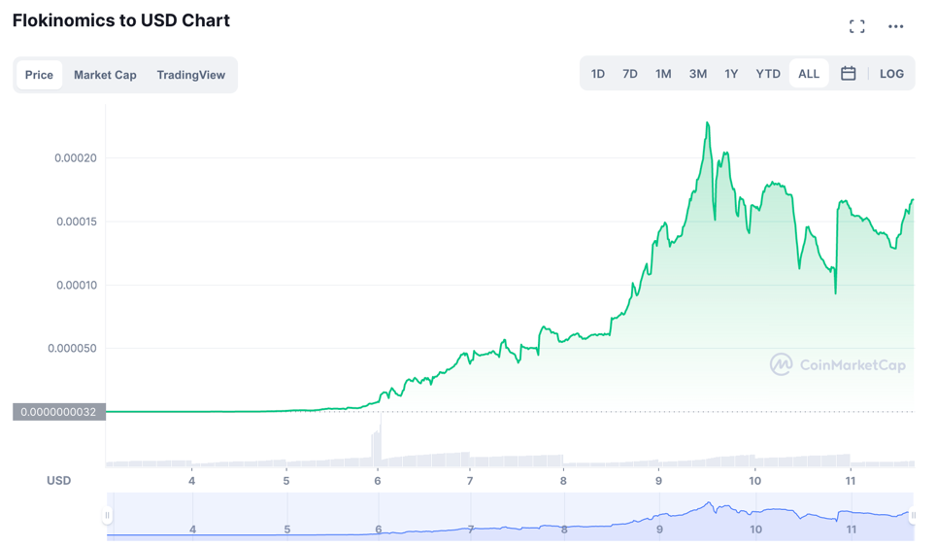 MM and FLOKIN are emerging cryptos with lots of risks. The overwhelming majority of the over 12,640 tokens will wind up on the scrap heap as dust collectors in computer wallets. However, as the market cap grows and Bitcoin and Ethereum are back in bullish mode, they will attract increasing interest from market participants looking to turn a few disposable dollars into a fortune.

Approach all cryptocurrencies with the understanding that every cent invested is at risk. The risk level is always a function of substantial rewards, and cryptos have redefined risk for those throwing investment dollars at emerging tokens.

Bitcoin And Ethereum Surge: New Highs By The End Of 2021?