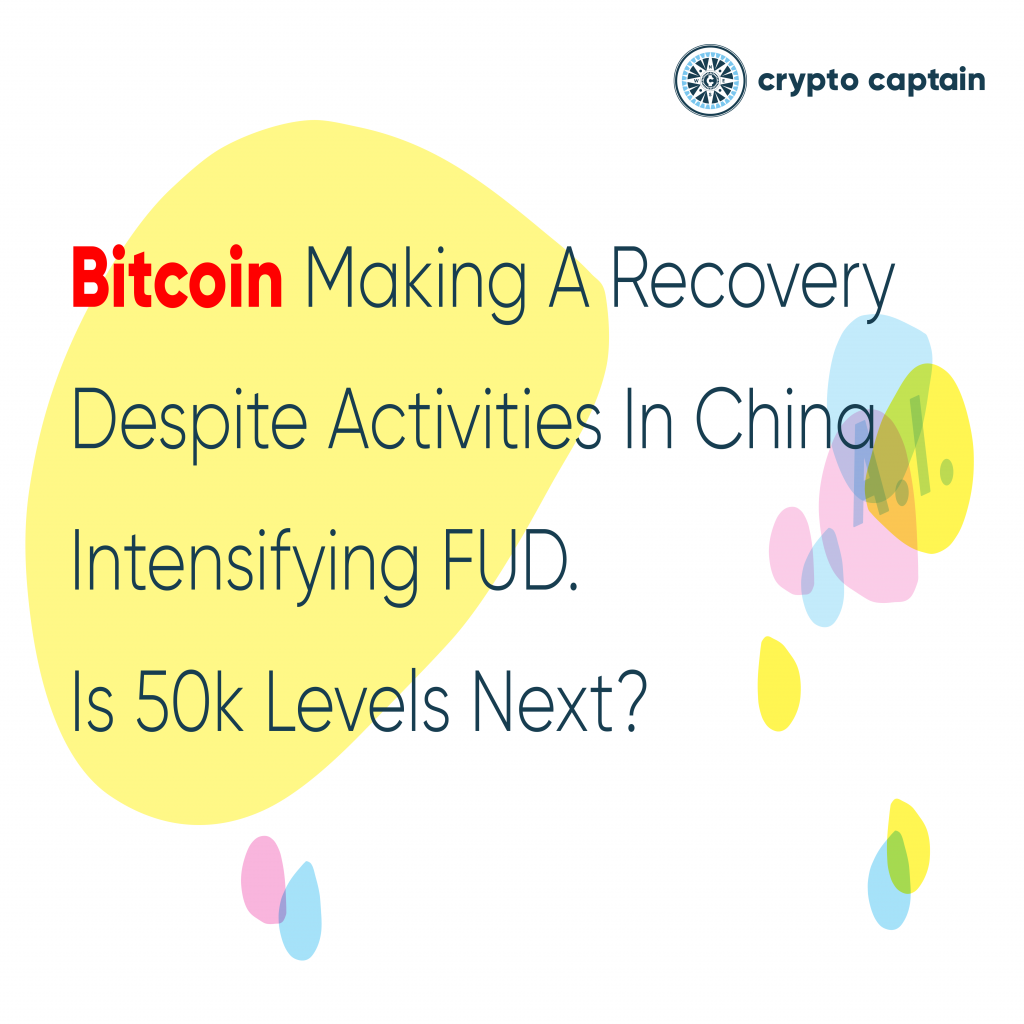 
Last week was dominated by fear and uncertainty in the crypto market, as Bitcoin took a major dip, dropping to as low as $39,600 and breaching the $40k support levels. Though Bitcoin quickly bounced and is trading at over $42k at the time of putting this article together, the crypto market has been left in FUD especially as induced by the Chinese clampdown on cryptocurrency-related activities within its shores.

News of Evergrande, one of China’s leading companies falling into debt led to the tumble of global markets, with the majority of cryptocurrencies in the pool of red, Bitcoin particularly losing 8% in 24hours, triggering fear, uncertainty, and doubt amongst traders.

The crypto market behavior believed by many to be very emotional when reacting to certain development was seen to have reacted this week. This can be seen from the chart below, supplied by Alternative.me a fear and greed index analytical tool that analyses the current sentiment of the Bitcoin market and crunch the numbers into a simple meter from 0 to 100.

The crypto market behavior believed by many to be very emotional when reacting to certain development was seen to have reacted this week. This can be seen from the chart below, supplied by Alternative.me a fear and greed index analytical tool that analyses the current sentiment of the Bitcoin market and crunch the numbers into a simple meter from 0 to 100.

The fear and greed index signals that Bitcoin (the main market representative of the analysis too) is currently undervalued following the current emotional sentiment and bias of the market.

Chinese Real Estate Giant Evergrande in Debt: What It Means For Bitcoin.

Evergrande a real estate giant and one of the largest companies in the country with the second-largest economy in the world, China, made the headline once again this week. This time, the company made headlines for its debt crisis of over $300 billion, news of which sent the global markets tumbling, pushing the crypto world into a sea of red.

Having borrowed over 300 billion US dollars from over 171 domestic banks to keep the company afloat, Evergrande is reportedly struggling to meet up with the payment of interest of its debts.

A fallout for Evergrande could have a toll on the world economy, the obvious reason being that it is a leading company in world power, China. With a strong international supply chain ranging from suppliers, construction and design companies, thousands of investors and business partners may lose their money if the company eventually falls out.

Evergrande’s stock has reportedly lost about 80% in the past 6 months. If Evergrande defaults, domestic banks in the country may activate a ‘credit crunch’ which may imply a decline in banks’ lending activity and increased rate.

Bitcoin was seen to have dipped and lost 8% the same day the news of Evergrande’s debt crisis surfaced. Turbulence in the financial market also shakes Bitcoin as it is not entirely immune to the market crisis just like every other risk asset. However, the crypto market on Wednesday threaded the comeback path as Evergrande makes a deal to pay its debt.

Bitcoin having taken a big dip on Monday made moves to bounce back on Wednesday following comments from United States Federal Reserve Chairman Jerome Powell.

A turnaround in the crypto market was seen following Powell’s comments which prompted the altcoin market to be populated with green shoots. Powell announces that hold off on a proposed taper (aimed at trimming down bond purchases) due to too many economic uncertainties.

Powell explained that the central bank plans to continue its current level of monthly bond purchases for the foreseeable future.

Michael Van de Poppe has this to say

A general dip and a sea of red in the crypto market as major events across China in the past week, the CryptoCaptain market sentiment curve shows the bulls make gains over the bears.

Last week was dominated by fear and uncertainty in the crypto market. The first catalyst was the potential default of Chinese real estate giant Evergrande, which dragged down equities and also crypto – putting a potential financial and economic crisis on the agenda. Whereas the meltdown of global markets probably will be prevented this time, it is one of the first signs, that inflation-driven bull markets in equities, real estate, and crypto might come to an end during the next one or two years.

The second catalyst has been the FOMC meeting of the US regulator. The Fed is expected to increase interest rates sooner or later to fight spurring inflation. However, this time the decision was deferred. Naturally, rising rates would affect the economy and equities markets badly, also affecting cryptos.

The third catalyst has been, again, news about China shutting down again mining facilities. The FUD dragged Bitcoin below the $44k support line but $40k is still holding. The outlook on the short term over next week might be subdued. Also, statistically, September has often produced negative returns.

When it comes to the crypto market outlook over the next months, I think we can be more optimistic. Not only from a statistical viewpoint, with a usual green fourth quarter, but also regarding the unchanged fundamentals and also technicals, if Bitcoin chooses to remain at least above the $38k support line and/or above the 21 weeks moving average.

Looking for proper buy and sell signals building on years of analytical experience? Subscribe to our signal service. Join today