CryptoNewsCourier
Home Guides The Stage Is Set For Another Bull-Run As Golden Cross Takes Place,... 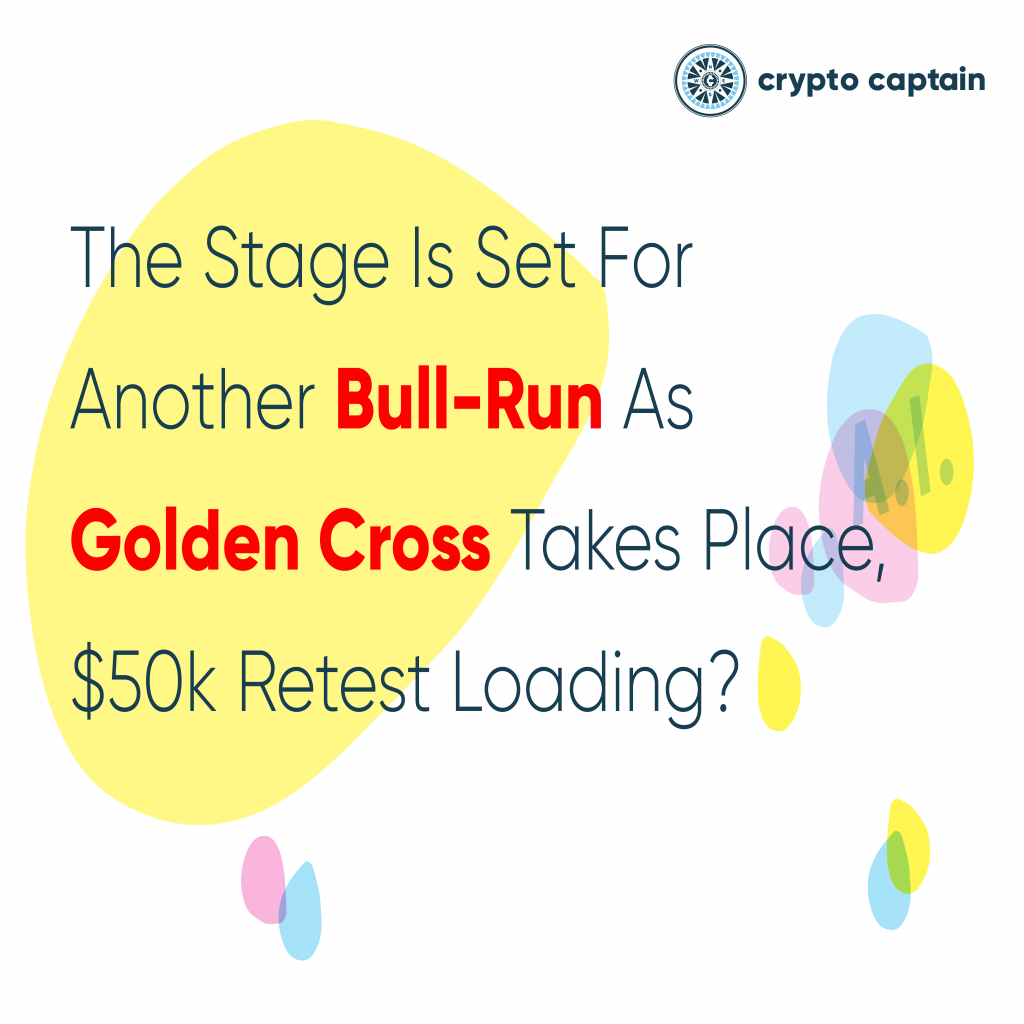 The Golden Cross, a phenomenon known to have historically triggered a surge in the price of the flagship cryptocurrency took place this week, a signal that is believed to mean that the bulls will take over the market in the coming weeks, propelling significant BTC price appreciations. The Golden Cross occurs when the short-term indicator (50-day moving average) goes above the long-term moving average (200-day) to the upside.

The Golden Cross though bullish is not the most reliable to predict Bitcoin price action. Eyes are still on the charts for proper validation of price actions. Expect the market as weak hands have been shaken and selling is cooling off.

China continues its anti-cryptocurrency actions as yet another province completely bans cryptocurrency-related activity in the region.

The world’s most populated country, China has maintained its strict approach toward digital currencies by enacting stringent laws in Hebei, a province that permits mining and trading activities prior to the ban.

As reported on Reuters, the province’s public security, education, and local financial regulatory bureau departments will actively partake in the clampdown of mining activities in the region. This is aimed at totally nullifying Bitcoin and related currencies in china.

Despite the clampdown, Bitcoin reacted positively to the news by showing immunity and maintaining a ‘business as usual‘ mood. Bitcoin and the rest of the cryptocurrency market dumped on previous occasions relating to bans and clampdown. On this occasion, however, BTC created resistance, and no sharp fall was seen rather BTC recovered from the previous day’s volatility and grew even stronger.

Bitcoin’s reaction to the unending Chinese clampdown this week shows a clear sign of the maturation of the cryptocurrency market.

Max Bernier leader of the fastest-growing political party in Canada “People’s Party” days to the federal elections in the country has throw weight in support of Bitcoin.

In a post he shared on Twitter, Bernier stated that he hates how the central banking system is destroying money and the economy;

Members of Bernier’s People Party are known to tout bitcoin as the solution to inflationary monetary policy. Political polls within the country show that the ‘People’s Party’ could win up to 6.1% of votes in the upcoming elections, though it holds no seat in the parliament.

Though BTC prices have been fluctuating of late, institutional and political adoption keeps booming which is good for the market.

Crypto expert with Twitter handle @pentosh1 opined that new ATH should be expected around October, November

@CryptoCapo_ has this to say;

The moving averages support a “strong-buy” action. With technicals signaling to buy, trading volume is expected to maintain an uptrend in the coming days.

Despite the halt of cryptocurrency-related activities in the Hebei region of China, and a clampdown on miners, the bulls continued to push upwards from where they stopped last week. Moving from 36% bearish to 27% at the time of putting this article together. We also witness a Golden Cross this week, historically known to signal price surge in the coming weeks.

This week saw some increase in downside volatility across the crypto market triggered by the uncovering of the fake news that Walmart would accept Litcoin payments. The dip resulted in Bitcoin testing the support zone between $43k and $44k. Support held weak hands were shaken out of the market, liquidity to the downside was taken off the market, and price reversed. So, it seems, Bitcoin resumed its uptrend and it should keep doing so as it holds the crucial support levels of $46.5k and of $44k at the least.

As statistically September often has been a red month for crypto, a risk of some downside still remains. At the time of writing, Bitcoin held support and was trading at $46.9k. So some further consolidation might be ahead before the next big bull runs are kicked off in crypto.

Overall, the fundamental macro indications are positive for crypto as it gets adopted more and more, as the global fiat money presses are becoming heated, driving inflation to high levels, as solutions to the energy consumption problem are put into production, and as some are saying, a supply shock for Bitcoin is imminent.

Looking for proper buy and sell signals building on years of analytical experience? Subscribe to our signal service. Join today

OneCoin Founder Ruja Ignatova Is Back After 5 Years

ASIC Had FTX Under Surveillance Before Collapse

What Next for PFPs, Art and Big Brand NFTs?