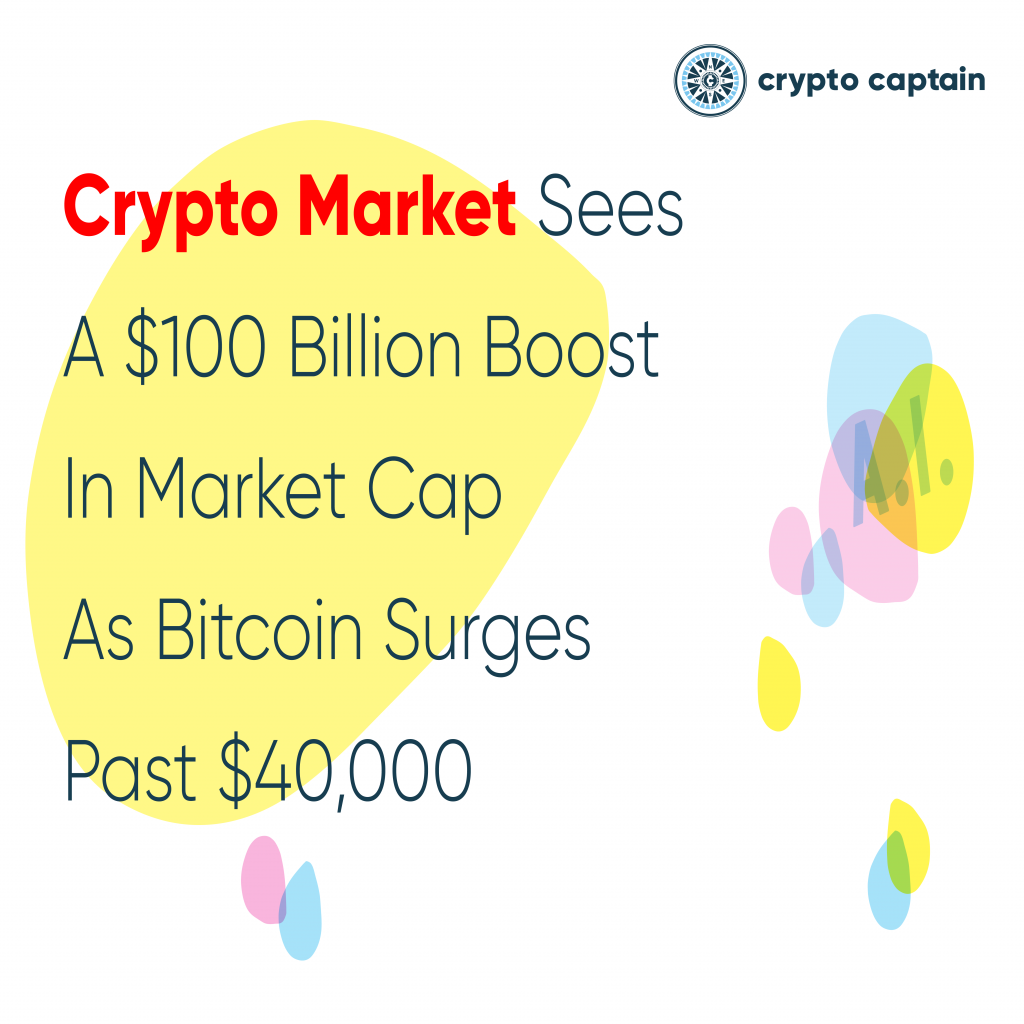 
The start of the week did not go all well for the cryptocurrency powerhouse as Bitcoin dropped from $40k it attained the previous week. Having attained two months high of $42k, Bitcoin dropped to a week’s low of $37,271k on Thursday. With a BTC rally reclaiming the $40k mark, the Crypto market cap has grown by $100 billion.

With Bitcoin retracing the $40k mark, analyst Willy Woo believes that price could become more stable in the short-term, with a possibility of a ‘sudden explode’ to a new range around $50-$65k.

Bitcoin’s rally back to the $40k market added about 30% to the Crypto market cap volume in the past 24 hours reenacting Bitcoin’s dominance in the crypto sphere.

As it stands, Bitcoin is in the undervalued green region. Bitcoin in the green region is considered a good time to invest. Following historical data, the current S2F pattern is similar to that of the first half of 2017 (as seen on the chart). During that period, a notable deep correction happened and that moment proved a great time to invest in BTC.

In a virtual event hosted by bword.org and tagged ‘Bitcoin As A Tool For Economic Empowerment’ with Cathie Wood, Jack Dorsey, and Elon Musk as guest speakers, the Tesla CEO revealed that the crypto industry is approaching a greener future with recent developments and efforts channel towards greener energy in the sector.

While applauding the progress toward greener crypto, Musk questioned the speed at which Bitcoin seems to be expanding towards renewable energy and called for due diligence in the transition.

As you can recall, Tesla a firm known to incorporate sustainable energy into the production of electric vehicles stopped accepting Bitcoin payments due to the ‘perceived’ overuse of fossil fuel in transactions involving Bitcoin.

With this development, a positive aura is expected around the crypto giant.

In the wake of the US congress moving to enact changes to cryptocurrency tax reporting in the United States, Coinbase CEO joins a league of top crypto persons to decry the proposed change.

On 19 July 2021, during a meeting with the President of the United States of America’s working group on financial markets, U.S. Treasury Secretary Janet Yellen pushed for greater regulations governing the issuers of stablecoins and stable tokens. Lawmakers also seem to buy into the idea of enacting a new tax rule proposed to generate extra revenue of about $28B.

Brian Armstrong CEO of Coinbase in a tweet on Wednesday made public his displeasure about the proposed changes. Faulting the bill’s wordings, Brian stated that the changes “…could have a profound negative impact…” in the US crypto market, which would have a ripple effect of pushing innovations offshore.

The proposed tax rule is believed to be aimed at expanding reporting requirements for brokers, tighter regulations towards businesses handling crypto, and will mandate that digital asset transactions worth more than $10,000 are reported to the Internal Revenue Service.

The highly anticipated and much-talked-about London hard fork has finally arrived on the ETH network. A major step in improving ETH and one whose impact will have a ripple effect on the entire crypto market.

The EIP-1559 comes with a system that burns some of the gas fees and implements a different transaction fee schema. Though, since its implementation yesterday, gas fees have gone up. The EIP-1559 features are necessary for the supply and issuance economics, having switched to a proof-of-stack, the economics is likely to become deflationary as against the previously inflationary of the proof-of-work.

Ethereum co-founder Joseph Lubin, prior to the launch of the London hard fork described the process as a journey toward making Ethereum become “ultrasound money.”

The move is essentially aimed at reducing transaction fees. It works in a way that gas fees are not sent to the miners for transactions. Instead, users will send gas fees directly to the network.

It's pretty insane that a group of people who don't even remotely understand crypto as a technology are trying to legislate it without any idea of the consequences https://t.co/g56yUSPtbE

Michael Van De Poppe has this to say;

Trading view’s moving averages support a “strong-buy” action. With technicals signaling to buy, trading volume is expected to increase in the coming days.

Just like last week, BTC/USD fell below and retraced back to the $40,000 handle. Bitcoin retracing back to $40k helped the crypto market cap grow by over $100 billion. This week’s rally is still not a true reversal of market sentiment. As Bitcoin price is moving higher on a short-term basis, expect to see different forecasts. We however think it wise that investors play safe to avoid falling into the trap that FOMOing into unverified forecasts brings.

Bitcoin produced a fake-out to the upside last weekend and is now again in the range between 30k and 40k. something bigger is required to decisively break 40k. So, it seems the bearish projection of CryptoCaptain’s market sentiment is still valid. The difference between signals stems from their considered factors and the time horizon. Due to last weekend’s fake-out, technicals predicted a buy signal.

However, BTC still remains range-bound. Still, it is good to see that the breakdown to 20k did not happen, as many investors were believing. So that’s a major takeaway: the most anticipated event can be already priced in once it happens, or it does not happen at all.

If you are looking for proper buy and sell signals building on years of analytical experience, subscribe to our signal service. Join today